PlantTape has gained a lot of attention for revolutionizing the transplanting process (80% reduction in transplanting labor requirements, better stands, higher crop yield), but the benefits of our automated transplanting system show up in the nursery, as well. 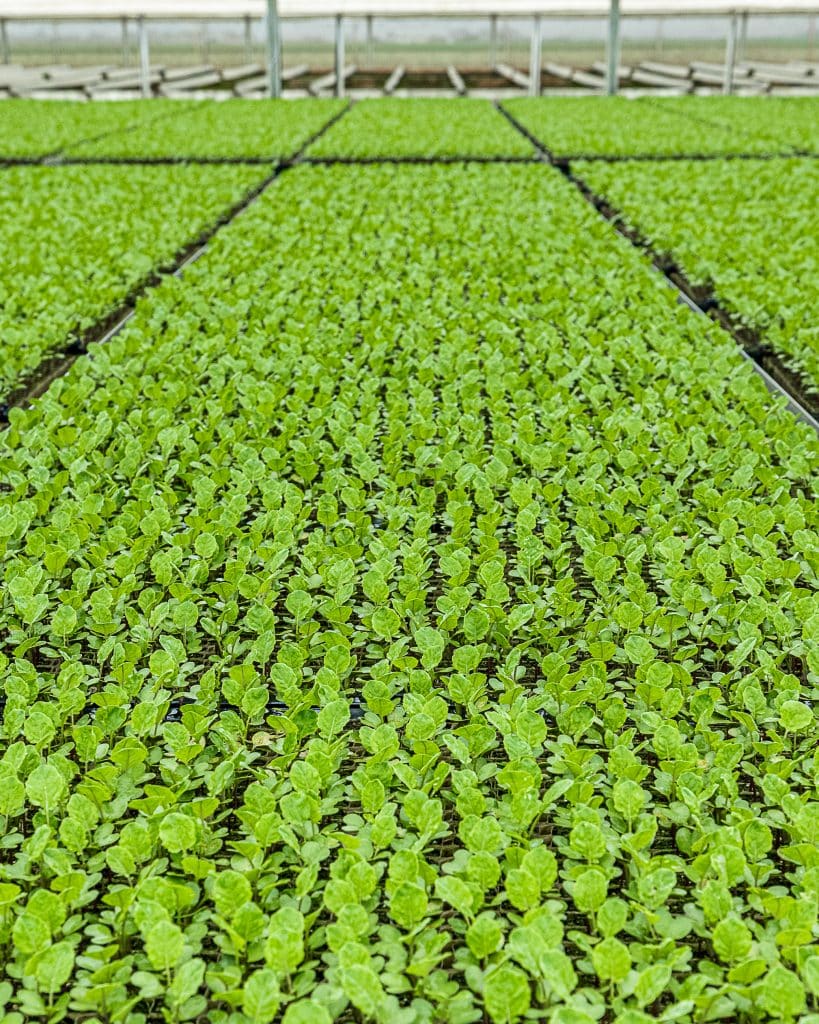 A nursery using the PlantTape system can double or even triple its seedling throughout compared to a traditional greenhouse using celled nursery trays.“The PlantTape system allowed me to double nursery production, due to increased plant density and shorter growing cycles.” –Jason Kelly, S.A.L.S Transplants, LLC

Compared to traditional nurseries that grow 116,272 plants per thousand square feet, PlantTape offers nearly double the plant density. While a PlantTape nursery tray is only slightly bigger than a standard 338 celled tray, it has a much higher holding capacity.

With the PlantTape system, a grower can opt to plant seedlings at any point after germination.

Other transplanting methods require workers to manually pull transplants from their celled trays. The plants must be sufficiently developed not to separate from the root system as they are manually pulled out of the tray, meaning they must remain in the greenhouse for a definite maturation period.

With PlantTape, in contrast, the seedlings don’t need to be pulled. Instead, each transplant is placed—still in its original soil plug—into the ground by the PlantTape planting modules. Accordingly, PlantTape seedlings can be transplanted immediately after germination if desired.

Combine shorter growing cycles with increased seedling density, and you’ve got a recipe for a high-yield nursery. 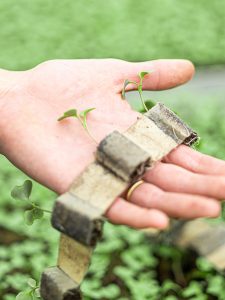 PlantTape has developed some enhancements to our standard tape material.

Logistical Flexibility on When to Plant

As we discussed in our article on PlantTape enabling a flexible transplanting schedule, PlantTape’s open-ended transplanting timing allows growers to coordinate planting around weather events, labor issues, or other constraints.

Growers Choose Whether to Use a Commercial Nursery

Another way PlantTape gives growers flexibility is by giving them the option to do in-house nursery operations.

For example, some growers find themselves geographically remote from any commercial nursery. With PlantTape, they can set up their own (highly efficient) greenhouse. PlantTape can sow the grower’s seed in one of our and ship it straight to their operation.

So long as the grower has a simple greenhouse set up with T rails and a watering/fertilizing boom, they are equipped to handle the nursery stage of the PlantTape automated transplanting system.

Come transplanting time, the grower simply loads their nursery trays of PlantTape seedlings from the nursery into their PlantTape 3-point planter, then transplants away.

PlantTape has developed some enhancements to our standard tape material, and these offer even more optionality to growers and nursery operators.

Our extended-life tape biodegrades more slowly than our regular tape, allowing nurseries to keep transplants in the greenhouse for longer residency times. PlantTape’s tape material begins to biodegrade when introduced to water. Our standard tape holds up for 4-5 weeks, which is more than enough for most crops or most scenarios. However, there are crops—onions, leeks, and parsley, to name three—for which a longer nursery stay is generally desirable. Additionally, there are climates or scenarios for which extending the nursery duration makes sense. For example, a rainy climate might necessitate a longer stay while a grower waits for dryer conditions. The PlantTape extended-life tape remains structurally viable for 8-10 weeks: more than enough time for any nursery scenario.

Additions to the Tape

PlantTape can add lime to our tape material, making it perfect for growers who wish to raise the alkalinity of their soil. We can also add slow-release fertilizer to the tape; this is ideal for extended-release tape especially.

PlantTape works with commercial nurseries throughout the US, as well as Canada, Spain, and the UK. If you’re a grower interested in adopting PlantTape and are looking for a nursery partner that uses our automated transplanting system, contact PlantTape for information about the closest participating nursery. For nursery operators interested in adopting the PlantTape system to serve PlantTape’s growers: we offer excellent support, training, and development resources to help you get retrofitted and up to speed.