Transplanting multiple commodities: a demo of the versatile PlantTape system

One of the many benefits of the PlantTape automated transplanting system is its versatility in handling a variety of commodity types. For growers that grow multiple commodities, this versatility proves invaluable. PlantTape gives growers the ability to have a single transplanter that can plant almost every commodity in their farming program

PlantTape recently did a field demo to showcase the versatile nature of our system. We loaded six different commodities into our transplanter and planted them all simultaneously.

The commodities we chose for the demonstration were: romaine lettuce, tomatoes, bell peppers, leeks, broccoli, and cilantro.  Prior to planting, each crop was sown at one of the sowing lines in Hollister, California

After 30-45 days in the greenhouse, the seedlings of each of the six commodities were brought to the PlantTape demonstration field near our Salinas, CA headquarters. A PlantTape 3-point transplanter was loaded up with all six commodities, with a line of each commodity corresponding to a planting module for a six-line bed configuration.

As can be seen in our demonstration video, the transplanter planted all six commodities at the same time without a hitch.

Although this is unconventional, the commodities grew well together for 8 weeks until the bed became overcrowded with the different crop types. 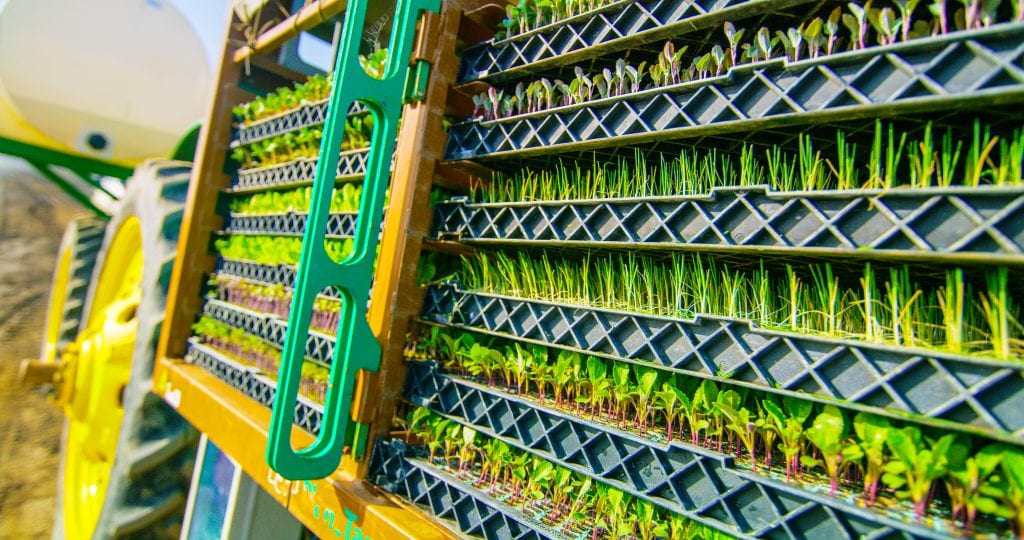 Switching between crops with PlantTape

PlantTape offers growers a way to change the pant to plant spacing with ease via a simple touch screen computer located on the side of the planter. Spacing can even be changed while the planter is running if the operator chooses. 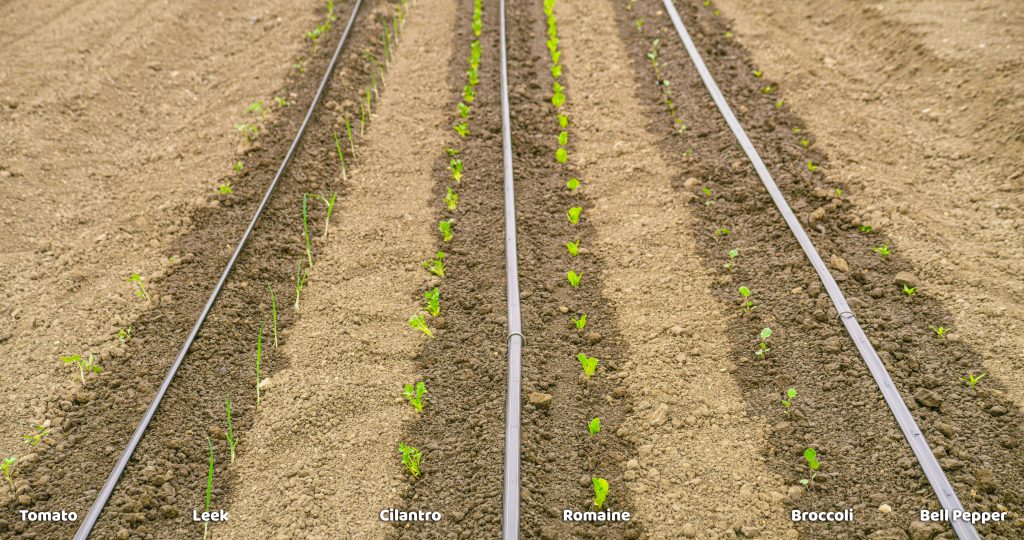 If two commodities have different bed configurations—for example, onions and broccoli—then a grower will need to make simple some mechanical adjustments to our automated transplanter.

Line-to-line spacing can be altered in the field with standard hand tools in a matter of minutes. Planting lines can be added or removed by raising or lowering planting modules via a valve on the planting module cylinder.

If a crew is planting 6 lines of onions on a 72” bed and needs to switch to 2 lines of broccoli on a 36” bed, they would load the broccoli seedlings into the transplanter, raise up the two middle planting modules to take them out of action, and make any desired line-to-line adjustments. After a short time, they’re back in business, planting two 36” rows of broccoli at a 72” wheelbase.

Compared to other transplanters, which are often manufactured with fixed bed configurations and designed for a specific commodity, the PlantTape automated transplanting system brings unprecedented versatility to growers of vegetables, tomatoes, and hemp.

Commodity-to-commodity versatility is only one of the many ways PlantTape empowers growers. As we showcased last month, the PlantTape system also offers flexibility in when to plant seedlings.

Not only is the PlantTape transplanter versatile, it’s also blazing fast. Recently, we decided to see how fast. We took it to 20mph and it still planted flawlessly. Read about the demo and why we feel confident in our claim of having the world’s fastest transplanter.

The PlantTape seedling planter is the fastest, most adaptable, and most user-friendly transplanter on the market. It’s only one component of the PlantTape automated transplanting system, which covers sowing, nursery operations, and transplanting.